10 Female Swimmers Who Are Trailblazers of The Sport

In Recognition of International Women's Day

We want to commend women all over the world for the achievements they’ve made through swimming, and for pushing social change through sport.

Female swimmers have a long history of breaking barriers and today, there are millions of female swimmers out there that are still trailblazing the sport of swimming. We wanted to share a list of 10 of the most influential and inspiring. They’re not just making an impact in the water, but they’re also making waves by pressing to progress equality in sport.

We hope that by reading this list, you too can be inspired to help change the conversation about women in sport holistically – from participation, to representation and decision-making.

The 20-year-old swimmer from Sugar Land, Texas, tied for first with 16-year-old Canadian sensation Penny Oleksiak in the 100-meter freestyle. Both women set a new Olympic record of 52.70 in the 100 free. Sarah Sjostrom from Sweden finished third in 52.99.

Manuel is the first African American female swimmer to win an Olympic medal in an individual event.

In the wake of police brutality that has strained race relations in the U.S. recently, Manuel hopes that her gold medal will bring some “hope and change” to the issues back home. (Image from Getty Images)

Annette Kellerman, an Australian woman during the early 20th century, made significant gains for women interested in swimming. In 1905, Kellerman became the first woman to attempt the English Channel. Although she failed in her attempts, she became a pioneer for women’s long-distance swimming. Kellerman also entered multiple international swimming races that had previously only involved men.

Additionally, Kellerman was a leading voice in advocating for a one-piece swimsuit, without bloomers or skirts, for women. In fact, in Boston in 1907, she was arrested for “indecency” for wearing a one-piece swimsuit. In a fateful ruling, a judge granted validity to Kellerman’s arguments that one-piece swimsuits allowed for swimming without restriction. However, the judge ruled that Kellerman should have worn a robe on land to cover up before and after her actual swim. 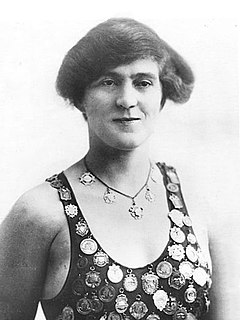 The 1912 Olympic Games were the first Olympics where women’s events were added to the swimming program. There were only two initial events: the 100m freestyle and the 4x100m freestyle relay. On Monday July 8, 1912, 27 women from eight different countries fought for the first individual gold medal.

Fanny Durack, representing Australasia (a combined team of athletes from Australia and New Zealand), set a new world record of 1:19.8 in the heats of the 100m freestyle before advancing to the final and being crowned the first ever women’s swimming Olympic champion. In the late 1910s Durack would go on to hold every single world record in women’s swimming from the 100m freestyle to the one-mile freestyle.

A few days after the 100m freestyle final, the British women claimed the first ever relay gold with a world record time of 5:52.8 in the 400 freestyle relay.

Shirley is an American former competition swimmer, Olympic champion, and former world record-holder in multiple events. Babashoff set six world records and earned a total of eight individual Olympic medals in her career. She won 27 national championships, and was a member of five world-record-setting relay teams.

Although she won many medals, it’s the four gold medals she didn’t win that stick with her the most.

Babashoff was widely considered one of the greatest swimmers in U.S. history — some even called her the female Mark Spitz — but her dream of individual Olympic gold was thwarted by an East German team that swept the women’s individual events in all but one race.

When Babashoff first suggested at the 1976 Games that the East Germans were using performance-enhancing drugs, she was ridiculed by the media.

Now, as doping scandals once again take center stage at the Olympic Games, the Fountain Valley resident and author of a new book, “Making Waves: My Journey to Winning Olympic Gold and Defeating the East German Doping Program,” hopes renewed attention on the issue will convince the IOC to re-award the medals from the 1976 swimming events.

Gertrude Ederle, who won three gold medals for the USA at the 1924 Paris Olympics, is best remembered for becoming the first woman to successfully cross the English Channel in 1926.

Not only did Ederle achieve a milestone for the sport of women’s swimming, but her accomplishment made a significant contribution to the women’s rights movement as a whole. Ederle’s swim was a full two hours faster than any of the five men who had completed the channel swim before her, which created quite a statement about the capabilities of women in sport.

Additionally, Ederle chose to complete the historic swim in a two-piece bathing suit. Her decision proved to be the first time a female swimmer had worn a two-piece suit in public.

Esther Williams is known today for the numerous films that she starred in, as a bathing beauty doing synchronized swimming, during the 1940s and 1950s. However, Williams’ relationship with the water initially began during her younger years, when she excelled at competitive swimming.

In fact, Williams swam a blazing 100 freestyle that qualified for the Olympic Team. Because of World War II and the cancelling of the 1940 Olympic Games, Williams was forced to shift gears from a competitive career to a film career. Williams worked as an actress with MGM and became famous for her balletic movements in glamorous pool settings scattered throughout her films.

For the greater public, Williams became the icon of women’s swimming, a fitness activity and competitive sport that had so recently been marginalized for its “indecency.” Because of Williams, everyday women—not just athletes—wanted to swim.

Sixty years after Esther Williams’ heyday, Dara Torres continued to expand the role of women in swimming by competing in her historic fifth Olympics (the most that at any swimmer had ever competed in) in Beijing in 2008.

Torres, a 41-year-old wife and mother, made headlines by being the oldest female swimmer to ever compete in the Olympics. Just to add to her glory, Torres won the silver medal in the 50 freestyle. She was touched out in the event by a swimmer sixteen years younger than her—Germany’s Britta Steffen—by a mere hundredth of a second. Torres’ feat served to shatter stereotypes establish that female swimmers could be wives and mothers, well out of their twenties, and still in top physical condition.

America’s Natalie Coughlin is a twelve-time Olympic medalist. At the 2008 Summer Olympics, she became the first U.S. female athlete in modern Olympic history to win six medals in one Olympiad, and the first woman ever to win a 100-meter backstroke gold in two consecutive Olympics.

At the 2012 Summer Olympics, she also earned a bronze medal in the 4×100-meter freestyle relay. Her total of twelve Olympic medals ties her with Jenny Thompson and Dara Torresfor the most all-time medals by a female swimmer.

At age 15, Katie Ledecky set an American record in the 800-meter freestyle to win a gold medal at the 2012 Summer Games. Ledecky has since remained unbeaten in all major international competition, shattering world records across an array of freestyle events ranging from 400 to 1,500 meters.

How Will You #PressForProgress?

To learn more about how the National Olympic Committee is setting the stage for lasting change in sport, click here.

Want to learn about how women are swimming with MySwimPro and making a difference in their lives? Read Patty’s story here.